Etiquette and the Recipe for a Garden Tea-Themed Bridal Shower

The etiquette rule used to be that the bride's family members could attend the bridal showers, but not host them, nor plan them in anyway. Those rules went the way of June Cleaver ~ They left the building.

Nowadays, family members do participate and sometimes in a pinch play hostess. In many cases they are "blended family" members now too. They also offer space if they have the house large enough to get everyone together in one place at one time.  This is no easy trick in the 21st century!


A garden tea luncheon was my sister in-law Peggy's idea. Peggy was playing off of Kelly’s wedding theme of a "Royal Garden Wedding" and Kelly does love tea. So the theme was not a complete surprise for Kelly. Her mother told her about some of the details, but not everything. She did want a few things left as surprises for her the day of the shower.

The table decorations and centerpieces were birdcages arranged with bright multi-colored flowers (these were then reused at the post-wedding cocktail area, though decorated with the same flowers selected for the wedding). Peggy had hoped to give them away to guests to take home, but it seems the florist’s helpers packed them up after the cocktail hour, and they were unable to get to them by the end of the wedding.
Peggy has a very spacious home, and though she was not playing hostess to the shower, as a few of Kelly's closest friends were, she had enough room to use garden animal statues around the room, (frogs, turtles, birds, rabbits, etc...) and then mylar flower balloons that grouped around the statues. Peggy's idea was to create a whimsical garden indoors. She also used a few mylar butterfly and ladybug balloons to complete the look.
For activities, a photo booth was created with fun accessories to use in the photos and an Instagram sign with Kelly’s wedding # to post the pictures was also used.

Peggy also had a table to create one's own tea: She set bowls out of different teas, and using provided tea bags, guests could scoop tea and make their own blends.
Each guest received a china tea cup and saucer (each one was different) along with detailed instructions on how to brew the perfect cup of tea. Also a tea pouch personalized with autumn leaves and “Falling in love” Kelly & Casey 10/4/14 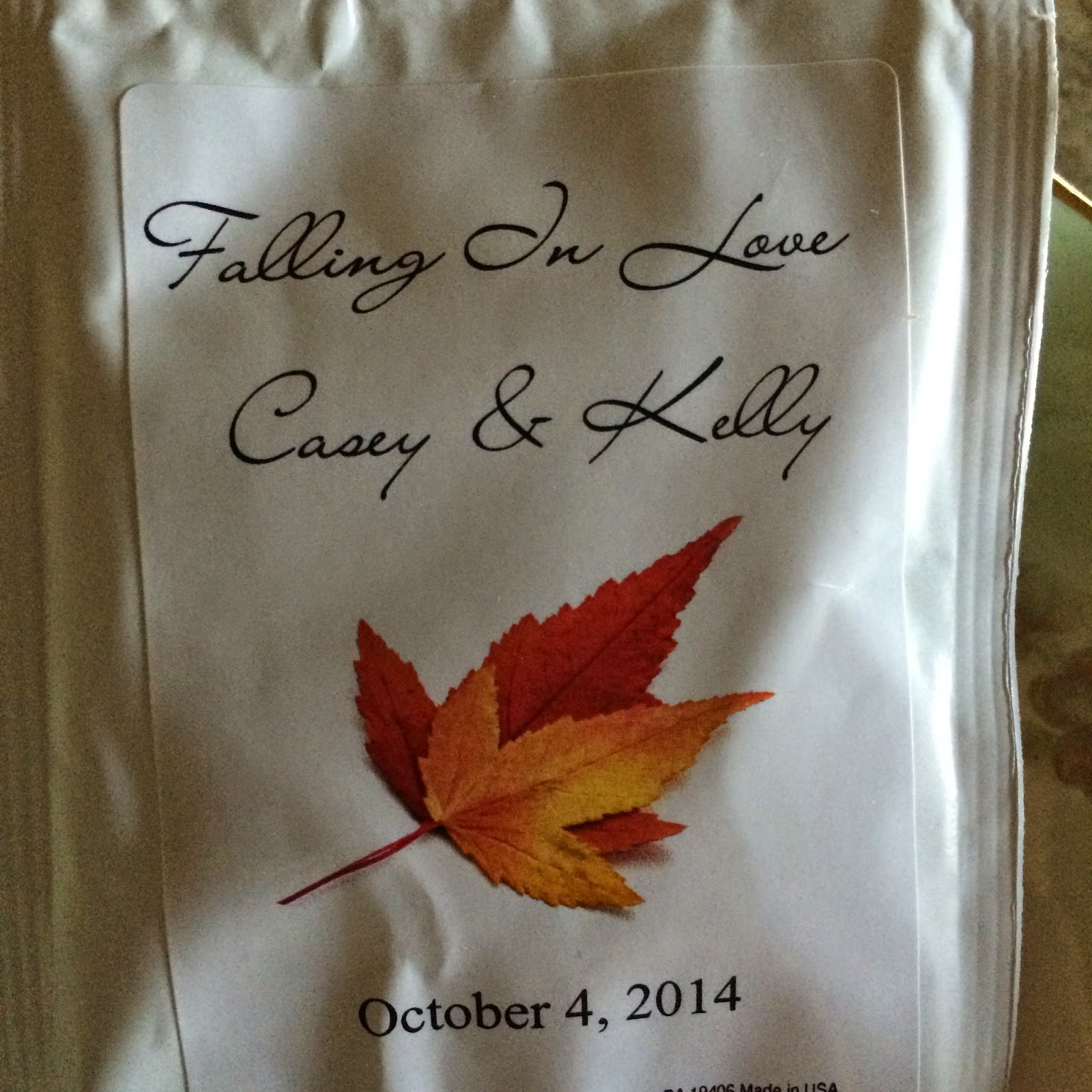 Of course, Peggy asked good friend, Chef Cathy McKnight, to help with the menu and she provided everything as a gift to Kelly. 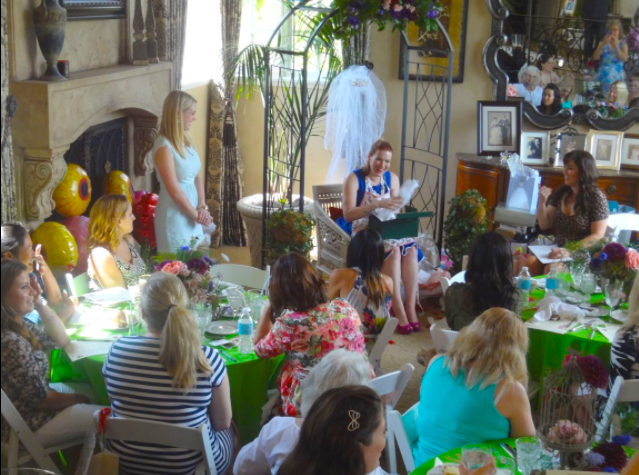 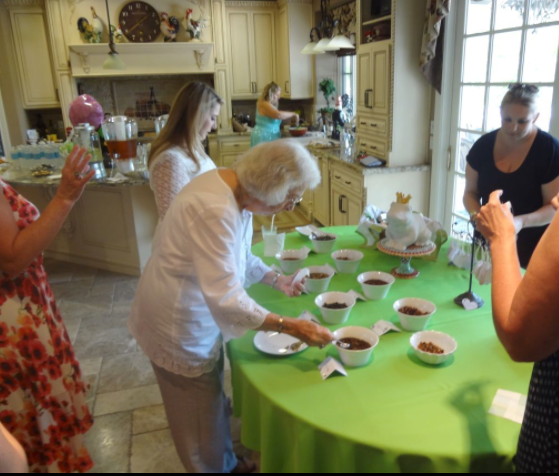 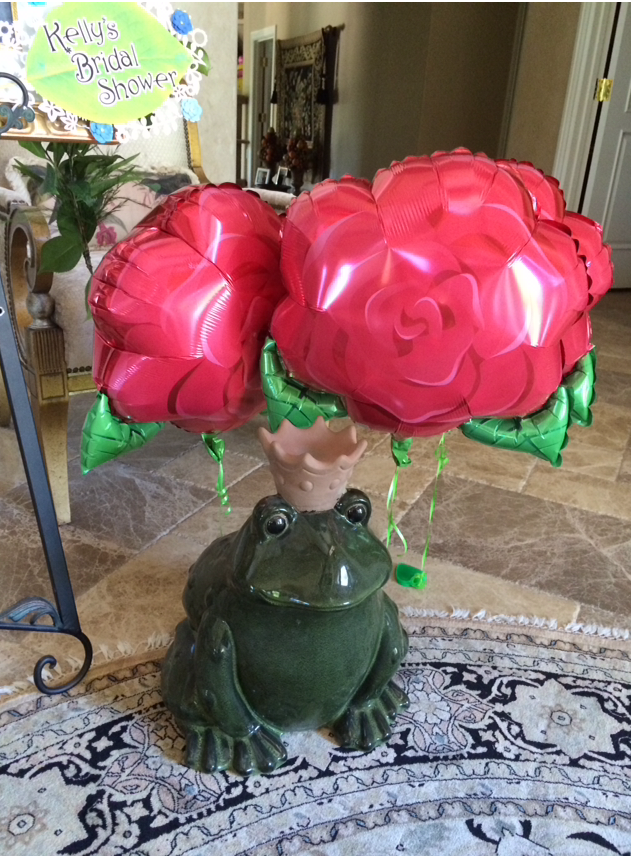 “Allied to the afternoon tea are various phases of informal daytime entertaining. For example, there is the "shower" for a bride-elect ("linen," "culinary," or what you will). A friend of the bride-to-be invites a coterie of girl friends to meet the guest of honor, giving each girl time to provide some beautiful or useful gift, the presentations to be made with amusing ceremonies.”

“The "thimble bee," a favorite diversion of the quiet matronly set, each one bringing her own bit of needlework to while away an hour or so in pleasant conversation. One of the number may read aloud, with pauses for comment at will. The thimble bee is a modern version of the good old-fashioned "spend the afternoon and take tea." Both the shower and the thimble bee may be given in the forenoon, if preferred." From 1919, Agnes H. Morton's “Etiquette”


A good many years ago a friend of a young woman who was about to be married decided that the only gift she could afford was too slight an offering to express the love and good wishes that she felt. Knowing that there were other friends who felt the same way she called them together and suggested that they present their gifts at the same time. Then and there the idea of the "shower" was born.

The custom has prevailed and in most instances to-day the shower has a special purpose, such as the linen shower or the kitchen shower or the book shower. It is a very charming way of presenting gifts that would seem too trifling if they were presented alone. Intimate friends of the bride are the guests at a shower. It is usually a very informal affair and nearly always a surprise to the bride. The gifts may be hidden in a Jack Horner pie, they may be wrapped in all sorts of odd packages, or they may be presented in any of a hundred and one attractive ways. Originality in this, as in all entertainments, is greatly to be desired.

The young lady who is honored with a shower thanks the guests verbally, and afterwards she may write each of them a little note expressing her gratitude. It is necessary to do so if the affair was an elaborate one and the gifts were expensive.” From 1924 Lillian Eichler's “Book of Etiquette / Volume I”


“It is not uncommon for a bride-elect to receive a few engagement presents. (These are entirely apart from wedding presents which come later.) A small afternoon teacup and saucer used to be the typical engagement gift, but it has gone rather out of vogue, along with harlequin china in general. Engagement presents are usually personal trifles sent either by her own very intimate friends or by members of her fiancé's family as especial messages of welcome to hers—and as such are very charming. But any general fashion that necessitates giving engagement as well as wedding presents may well be looked upon with alarm by those who have only moderately filled pocketbooks!” From Emily Post's 1922, “Etiquette”

A Good Housekeeping Magazine article account of a 1907 bridal shower, courtesy of @GeroDynamics 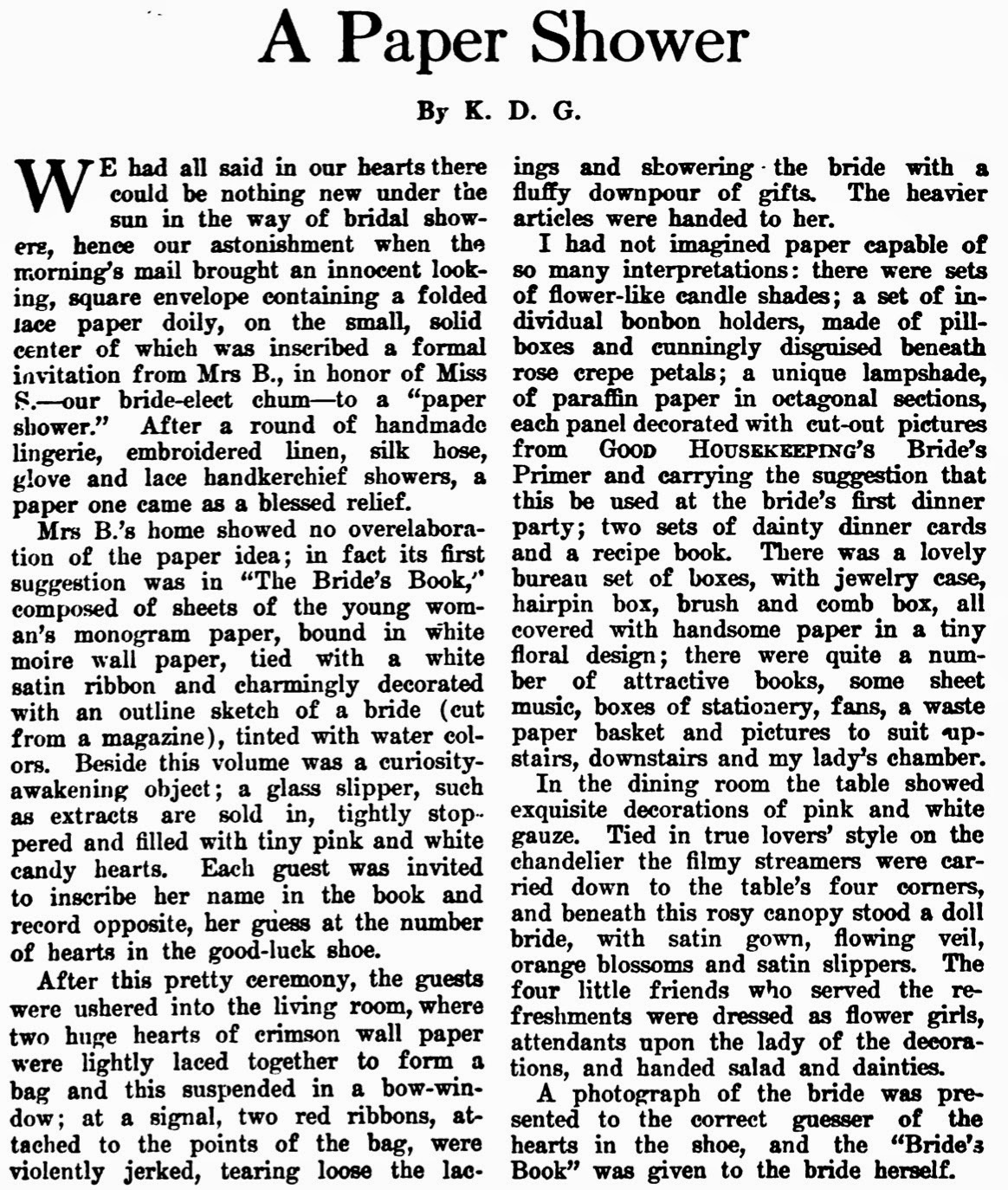