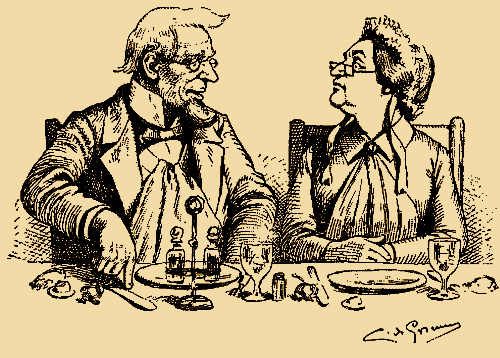 If Peter Piper picked a peck of pickled peppers, did Peter also politely polish off the pickled peppers with a pickle knife & fork? He did if he was living in the mid 1800s.

A few weeks back, I received this new fork that I had won on Ebay.  It is about 150 years old, but new to my collection.  I got to work quickly, trying to find out what food it had been designed for eating. I had bid on it and the listing said it was a "serving fork", but it was under 6" in length so I had my doubts that it was a serving piece. I then hit the books.
Richard Osterberg has several in his book Yesterday's Silver for Today's Table, listed as "pickle forks", but at the time this fork was made, most pickle forks came in sets with pickle knives, or were very long "castor" forks that came with pickle castors.
Pickle castors were elegant serving pieces for everything imaginable that one would serve pickled.  And in the mid-1800s, just about every food was pickled as it was the way most foods were preserved at the time.  Refrigeration was difficult without electricity, and "tinned" or canned foods were still very expensive at the time.  Only the very wealthy could afford them.
Discovering, or uncovering, what a utensil was made for is not as simple as looking for one person's identification of it, though Osterberg is an expert.  I remain merely an enthusiast when it comes to silver pieces. I needed more back up.
It is not always an easy trick to find experts who agree on everything when it comes to silver, seeing as so many pieces were given new names and uses, as popular foods became easier to get in the Victorian Era.  Food fads waned due to geographical reasons too. Some foods caught on in parts of the country, while those same foods never held much interest in other regional areas.  Still, knowing "the correct fork to use" was one way of setting yourself apart from others.
By the mid 1800s, silver flatware had become weapons of mass seduction and class separation. Think for a moment about Leonard DiCaprio's 'Jack' in the movie "Titanic".  He sat at a table littered with more than one person who had class and arrogance confused.  Yet as he didn't know what all of his utensils were for, among other things, he was looked down upon.
I wanted to know not just about the fork, but about Ursula Edson and who she was too; Where she lived, When she lived, What became of her, Etc...  Her name is monogrammed onto the handle of the fork, so it had to be hers.   Now that I own it, is there any connection between us?  I think not, but am still curious about her.
I have found online two Ursula Edsons who possibly once owned my new fork.  One was born in South Carolina in 1855.  The other was born in 1834 in New York.  As the maker of the coin silver fork, J. Hollister, made silver pieces during this era in Massachusetts, Connecticut and New York, my guess is that she was the Ursula Edson from New York.  More as I find out about her at a later date.  For now... More museum quality pickle sets!
Email Post