The Etiquette of Greeting and Seating Visiting Royalty

With the Duke and Duchess of Cambridge, along with the little Prince George, visiting New Zealand and Australia, I thought now would be a great time to write about this again. I had originally written a blog post about this seating chart back in 2011, but accidently deleted it in 2012 while trying to correct an error I spotted. Fortunately, I had most of it copied into an email, so I retrieved the text and photos to post again.

This is a fun and wonderful piece of history that I found on Ebay several years ago. It had evidently been folded up and stuck in an Australian drawer for over 60 years. I was actually looking for vintage Australian etiquette books on Ebay Australia when I stumbled upon the listing.


It is the original seating chart for the State Dinner held on November 23, 1934 in honour of a royal visit by Prince Henry, The Duke of Gloucester. He was in Australia from October 4th until December 11th of that year, and when I researched it later, I found it had been an important state visit by the Duke at the time. I was the only bidder on the item and won it for about $4.50 total. I had it framed and it hangs in my dining room.

You may be wondering, "Who is Prince Henry?" or, "Huh?" if you are here with me in the United States. He was the Queen’s uncle, and his son, the late Prince William of Gloucester, who died young in 1972, is who the Duke of Cambridge (aka the current Prince William) was named.


The Aussies know very well who he is however, so over the years I have been tempted to send this interesting historic document back to them. It should possibly be in a museum or with a historical group in Australia. Or, maybe mine is one of several copies they made for the 1934 event. Either way, I enjoy it and find it fascinating. Like I wrote in my book on mango forks, the Australians are the nicest people to do business with on Ebay, so I keep thinking I may just pop on over to visit there myself some day.

I find it interesting who sat where at this dinner. Of course the Duke was seated in the center at the head table, labeled "A", along with local Australian dignitaries flanking him on either side. The Consul-General from Germany was at Seat 8 at Table B, and fairly far from the center of Table A, where the Duke sat. But he was 4 seats away to his left from the Consul from Poland and 4 seats away to his right from Captain S.S. Bonham Carter. Behind him, to his left just 2 seats away, seated at Table C was the Consul-General to France. In just 5 years time, Great Britain and France would be declaring war on Germany, due to its invasion of Poland.


Seated at tables C, D, E, F & G, were Consul-Generals from China, Spain, Norway, The Netherlands, Finland, Brazil, Paraguay, Czecho-Slovakia, Italy and Denmark, along with the U.S. and other assorted countries. Representatives from the church, Reuters, The Telegraph, The Sun, Labor Daily, and others were also seated throughout the mix. Some printed names had been crossed out, with new names written in by hand. Others were just listed as "Official." Notably absent? Women!


Now back to the Duke... In 1934, the Duke of Gloucester was Prince Henry. Born on March 31, 1900, he was "Henry William Frederick Albert". He was the third son of George V and Queen Mary, thus he was the uncle of Queen Elizabeth II.

The Australian National Archives has a wonderful page devoted to him and his 1934 visit. The following are a few passages I found interesting...
Prime Minister Lyons first announced news of the tour in Parliament:

"I have great pleasure in intimating that since the last meeting of this Parliament His Majesty the King has graciously given his consent to the visit to Australia of a member of the royal family on the occasion of the centenary of the state of Victoria. As honourable members are probably aware, His Majesty in the first instance approved of his son, Prince George [the Duke of Kent], visiting Australia. Later however, advice was received to the effect that His Majesty felt that Prince George, after a strenuous tour of South Africa, should not, in the same year, undertake another tour. Consequently, His Majesty approved of the substitution of His Royal Highness the Duke of Gloucester.

From the Courier-Mail’s reporting of the event, it would appear that the Duke’s visit to Queensland at least was a wild success:

"A dignified figure in a cavalcade of pomp and pageantry that struck an Imperial note, the Duke, his face browned with Queensland’s sunshine, made a truly Royal progress through bannered streets that echoed with the crash of band music and the skirl of bagpipes, and in which cheering thousands formed living colonnades, so densely packed that they seemed a solidified mass, vital and vivid with its pulsating loyalty, pouring forth with mighty voice its affection for the King’s son."


I was especially amused by this passage:

It would seem that the only negative incident of the Duke’s tour took place during his visit to Toowoomba:

A remarkable incident was associated with the Duke of Gloucester’s final hour in Toowoomba, when, at supper at the Citizen’s Ball, he was requested by a fireman to cease smoking a cigarette! The Duke was momentarily dismayed by the unusual nature of the request…The incident, which was witnessed by a number of people near the principal table, was exceedingly regretted, as it was the only unfortunate happening in what was regarded as the most brilliant social gathering ever held in Toowoomba...When seen later, the Mayor said it was the most monstrous incident of which he had ever heard.

Under the heading of "General Correspondence relating to the Royal Visit, Canberra 1934-1935" you will find this recollection:

"In Queensland, the Courier Mail compiled a list of hints for citizens planning to celebrate the Duke’s arrival in the city. The newspaper stated, ‘Police and ambulance officers, remembering incidents of other royal visits and experiences in southern capitals, have issued these “Don’ts” to Brisbane citizens who will be in the city to welcome the Duke today.’

• Don’t let your pet dog follow you to town where he may be hurt or lost in the crowd
• Don’t let your youngsters wander away from you – if you can  help it
• Don’t go out without your hat
• Don’t expect the conductors to change a pound note.

When Prince Henry's brother, George VI, came to the throne in 1936, Henry was required to stay in the United Kingdom.  He had been appointed a potential regent for his niece, so until she came of age, in case her father died, Henry was needed there if she ascended the throne as a minor.

He was also the 11th Governor-General of Australia, from 1945 to 1947 and when he died in 1974, he was the last surviving Knight of the "Order of St. Patrick" and the longest surviving child of George V and Mary of Teck.

The Current Duke of Gloucester is a grandson of George V and a first cousin to The Queen. He became heir to his father's titles following the death of his elder brother, Prince William of Gloucester, in a flying accident on 28 August 1972. He succeeded his father in June 1974.

Born Prince Richard of Gloucester on 26 August 1944 at Northampton, he was christened Richard Alexander Walter George. When he was four months old he was taken by his parents to Australia, where for two years (1945-47) his father was Governor-General.


There are no obligatory codes of behaviour when meeting The Queen or a member of the Royal Family, but many people wish to observe the traditional forms.

For men this is a neck bow (from the head only) whilst women do a small curtsy. Other people prefer simply to shake hands in the usual way.

On presentation to The Queen, the correct formal address is 'Your Majesty' and subsequently 'Ma'am'.

For male members of the Royal Family the same rules apply, with the title used in the first instance being 'Your Royal Highness' and subsequently 'Sir'.

For other female members of the Royal Family the first address is conventionally 'Your Royal Highness' followed by 'Ma'am' in later conversation. 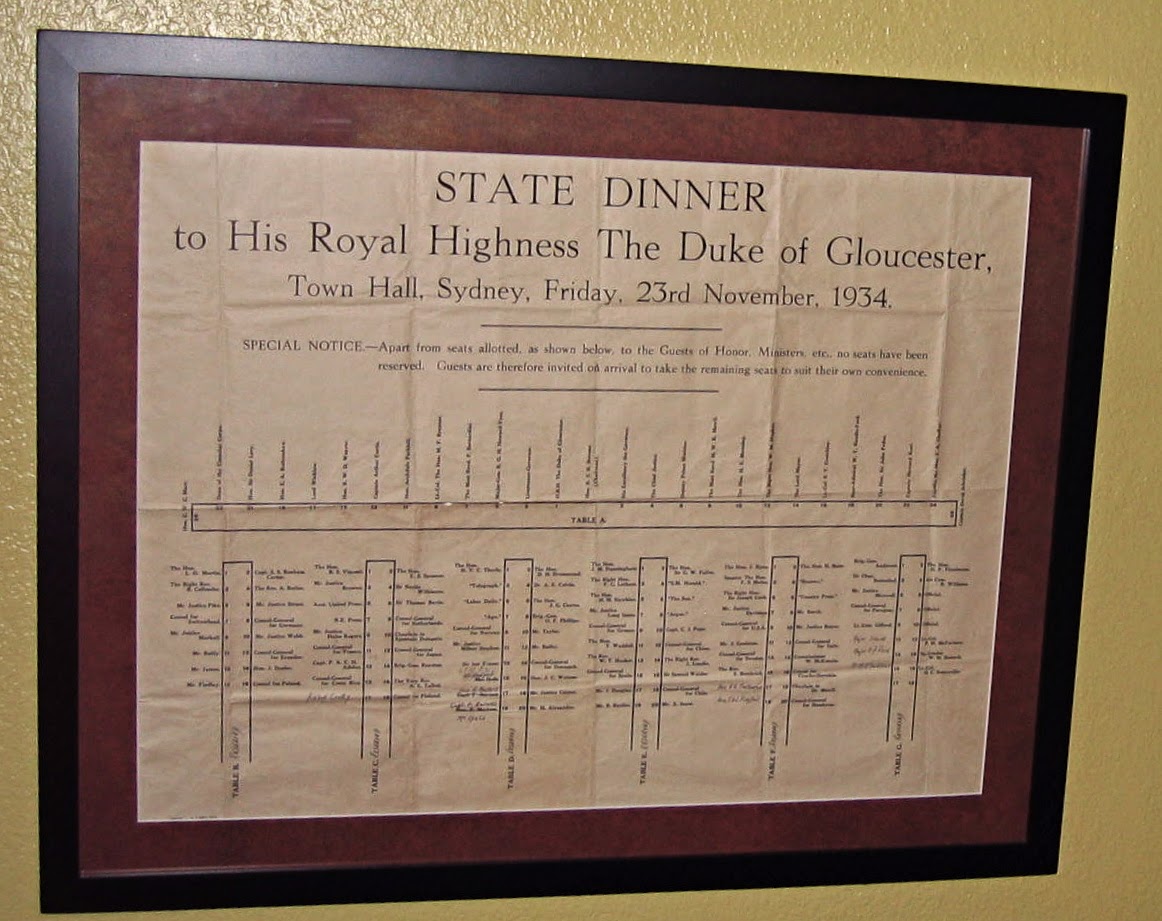