An open letter to Mariana Fernades on Screen Rant, regarding her April 13, 2019 post: 5 Historically Accurate Details About Downton Abbey (And 5 That Were Pure Fiction) 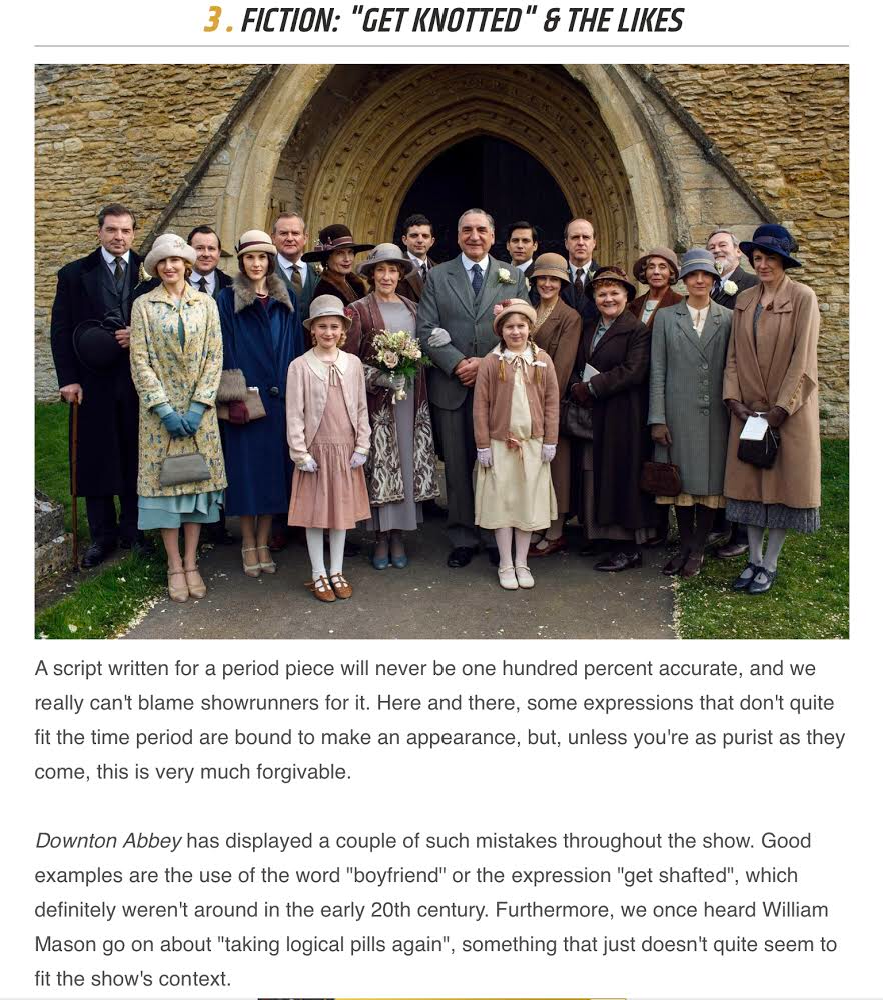 I’m not on Facebook, so I was not allowed to comment on your Screen Rant article. As #3 of “5 Historically Accurate Details About Downton Abbey (And 5 That Were Pure Fiction)” is inaccurate, (and I know this because I addressed it here on my blog back in 2011 when The Telegraph first made similar accusations), I thought I should bring it to your attention.

Here below, I offer proof of the cultural terminology and popular common phrases in use during the Victorian and Edwardian periods, using the complete list that the Telegraph asserted as inaccurate to the time period being portrayed.

Assertion #1- The word “boyfriend” was not used during this time.

The phrase is found in the following: Official report of debates Council of Europe. Parliamentary Assembly, Council of Europe, page 470 (1895): “... from yesterday's edition of The Times of London which states, ‘A woman who joined a company run by fundamentalist Christians was required to sign an undertaking that she would not live with her boyfriend.’”

From Wenderholme: A story of Lancashire and Yorkshire, By Philip Gilbert Hamerton, Page 301, (1876): “This cheered Edith's heart considerably, but still there was a certain moisture in her eyes as she bade farewell to her boyfriend.”

From The life and remains of Douglas Jerrold By Blanchard Jerrold, Douglas William Jerrold Page 331 (1859): “My early boyfriend, Laman Blanchard, and Kenny Meadows, a dear friend too, whose names have become musical in the world's ear, were of that society — of that knot of wise and jocund men ...”

Reality shows the phrase found in the following from: Debates: official report, Volume 2, Canada House of Commons (1888): "I do not know what assurance can be given that people can be guaranteed that they do not get shafted, to the favour of some other group."

The phrase is found in: The Westminster Review, Volume 124, Page 402 (1885): “In foreign affairs, when they get knotted, a Special Commissioner is appointed to report upon the situation, and to advise as to means of unravelling the tangled skein of affairs.”

The phrase, which supposedly wasn’t used at the time, is found in the following from: Fraser's magazine, Volume 19 By Thomas Carlyle, page 606 (1879): “He looked so rosy, so
cheerful, so placid, such a picture of rewarded philosophy and virtue, surely he must be the happiest of mortals.”


From: Vanity Fair: A novel without a hero, By William Makepeace Thackeray, Page 95, (1845): “The honest Irish maid-servant, delighted with the change, asked leave to kiss the face that had grown all of a sudden so rosy.”

From: The complete works of William Shakespeare, Johnson: Page 556, (1863): “Me of my lawful pleasure she restrain'd, And pray'd me, oft, forbearance: did it with A pudency so rosy, the sweet view on't Might vvelghave warm'd old Saturn; that I thought er As chaste as unsunn'd snow :—O, all the devils!” (And Shakespeare actually wrote this over 200 years earlier!)


Assertion #5- Some Downton Abbey viewers have baulked at the use of the word “boyfriend,” as well as the concept of a “professional woman,” which is used to describe a maid who wants to leave domestic service to become a secretary." The latter half of that statement is most amusing, as there are so many, many references to the term “professional women” in newspapers and in books from the 1800s. Too many to choose from, so I picked one that ironically ran in the Telegraph.

It’s an article in an 1898 New York Times, referencing the spirited ongoing debate in the pages of U.K.'s The Daily Telegraph, titled “Should Wives Work? Opinions of English Men & Women-What an American Woman Thinks About It” quite plainly spells it out, quoting a British reader's comment in The Daily Telegraph, “Several professional women, talking sensibly of the subject, say that their business life will make them more careful in the choice of a husband ...”